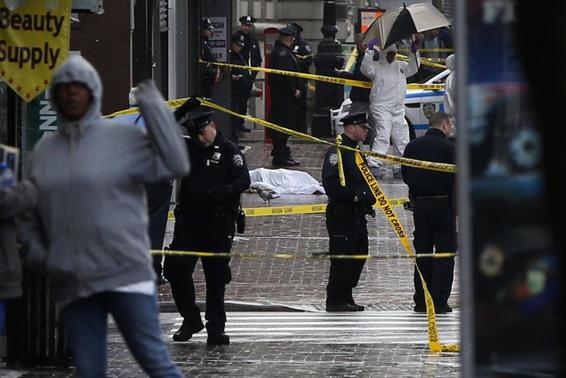 Yesterday we were talking about the Ottawa incident and how an armed man started shooting people, killing one soldier who was on duty at the time of the attack. The attacker was shot dead eventually and the case is being investigated, as there are rumors of a terrorist conspiracy. Today another shocking incident made the news. The New York hatchet attack shocked many with its strangeness. It all happened very quickly; a group of police officers were trying to pose for a photographer when a man carrying a hatchet started attacking the New York police officers. The attacker injured two officers, one critically. Before hurting others, the attacker was shot dead by one of the officers.

The police officers were patrolling on foot when they were asked by a photographer for a picture on Queens street at around 2 p.m. Suddenly a man with a hatchet in his hands came out of nowhere and started striking at the officers. He first hit a police officer in his right arm and then hit another officer in the head, injuring him very badly. The other two police officers managed to stop the New York hatchet attack by shooting the assailant and killing him on the spot.

There is no information regarding the attacker’s identity but some believe he was about 32 years old. A 29-year-old female was hit by a stray bullet while the officers were shooting at the attackers. The woman was taken to the hospital and underwent surgery. She is now recovering and in a stable condition.
The two injured officers are treated at the Jamaica Hospital. The 25-year-ol officer who was struck in the head was in a critical condition but is now stable, after being in surgery. The other officer is in stable condition, as well.

No one knows the motive for the gruesome attack but police are investigating the case as we speak. They have declined to link the attack to “terrorism” but there are speculations going around it.
What do you think about the New York hatchet attack? Do you think it could be related to terrorism? Leave your comments in the section below.