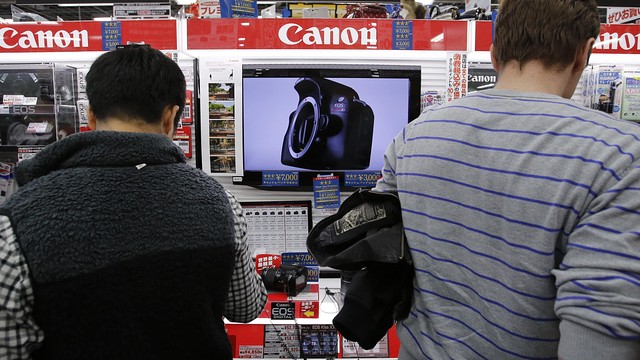 Japan’s major camera manufacturer, Canon revealed that its profit went down as low as 1% this year because the Yen has lost its power as a currency recently. The Canon profit went down because the demand for digital cameras is decreasing, as more and more people are shifting to smartphones, tablets and other smart devices for taking pictures. Canon also lost money because the company invested in new business trying to make up for what they lost from the camera sales.

Although the Canon profit went down this year, the Japanese company’s officials made stated that they are quite hopeful and the future profit will rise again.
The company is expecting this year a net profit of 250 billion yen, which is more than what they previously forecasted: 240 billion yen. The company witnessed a decrease in this year’s sales of 3.74 trillion yen. The company officials said that this unexpected decrease of cameras and printers demands is due to the fact that the national currency, the Yen has lost its value on the stock market.

Canon also predicts a 12.3% rise in net profit up to 186.7 billion in the following nine months until September. Canon is also expecting an operating profit rise of 8.7% next year, meaning that they are expecting a 265.0 billion yen. The Canon profit have gone down to at least 1% as opposed to last year. This translates into a 2.67 trillion yen profit, the Canon representatives said.

They added that:
“Corporate demand for multifunction printers will likely continue growing at a moderate pace. While sales of SLR (single-lens reflex) cameras in Europe and Japan may remain subdued, demand in the United States and China are expected to recover.”

Experts believe that the Canon profit did go down because the Yen has dropped from 80 to the 108 level against the US dollar. This means that a cheaper currency will help make the Japanese exporters more competitive and it will inflate the repatriated profits in yens.

Canon is not the only Japanese company that is affected by the Yen’s decrease in value. Rival companies like Olympus and Sony, both specialized in digital cameras, have seen a huge drop in demand for their imaging products.