In a new turn of event in the murder case involving Olympic and Paralympic athlete Oscar Pistorius,  the South African prosecutors are going to appeal against the verdict of culpable homicide and the five-year imprisonment sentence pronounced against him last week.

The development comes in the light of several public and legal criticism of the decision of the judge to release the track star of murder.

Pistorius, who has amputated lower legs, is accused for allegedly murdering his girlfriend last year on Valentine’s Day after shooting at her with four 9mm rounds into locked door of a toilet.

Pistorius has been denying the accusations saying he mistakenly shot into a locked door thinking of an intruder hiding behind it.

The appeal was announced on Monday in a statement on micro-blogging site Twitter from National Prosecuting Authority (NPA).

“Oscar Pistorius judgement, NPA will be appealing both the conviction and sentence,” NPA spokesperson Nathi Mncube posted on Twitter.

The state had been unsuccessful in convincing judge Thokozile Masipa during the seven-month trial of the high profile case about the intent of Pistorius over the killing episode when he fired at the locked door.

Masipa’s verdict to rule out murder was heavily condemned by the Women’s League of the African National Congress (ANC) and several legal experts, who have termed the killing as an erroneous interpretation of ‘dolus eventualis’.

Dolus eventualis is the legal principle under which a person is held accountable for the foreseeable consequences of their actions.

“We have already sought a legal opinion on the proceedings thus far, especially on the interpretation of the Pistorius judgment and in particular the understanding of the concept of dolus,” the ANC Women’s League said before Mncube’s statement.

“We believe regardless of whom Mr. Pistorius believed was behind the bathroom door on that fateful night, Mr. Pistorius shot to kill and therefore a murder did occur,” ANC Women’s League added further.

A possible error of law has opened the path for an appeal by the state.

After the court announced yesterday the Oscar Pistorius sentence of 5 years for the murder of his girlfriend Reeva Steenkamp, the parents of the victim said that they are “satisfied” with the judges’ decision. Reeva Steenkamp’s parents Barry and June Steenkamp made an official statement on the “Good Morning Britain” broadcast show, saying that although there is still a “big missing piece of the puzzle” in the murder of their daughter, they will accept the five-year prison sentence announced yesterday.
The victim’s parents said that they are trying to come to terms with what Oscar Pistorius did but that they will try to accept the judge’s decision of sending Pistorius to serve 5 years in a South African prison. The parents of the victim said that:
“It’s not that we want vengeance or anything or him to suffer with his disabilities, but at the same time we feel satisfied that he will realize now that you can’t go around doing things like that. We have gone along with the judge and her decision. Only Oscar knows whether that sentence is acceptable to him; I’ve got my feelings to the whole thing but we do accept what the judge handed down.”
Oscar Pistorius became known as the double amputee medal-winning athlete. He was convicted of killing his girlfriend on Valentine’s Day 2013. Pistorius said that he never intended to shoot his girlfriend because he didn’t know it was her, as he mistook her for an intruder. Oscar Pistorius shot his girlfriend four times through the bathroom door and killed her. The judge convicted Pistorius of culpable homicide and cleared him of murder. Pistorius was found guilty of negligent killing but the victim’s parents don’t think he killed their daughter by mistake. The victim’s parents talked about the problems Pistorius and his girlfriend were having, saying that their daughter told them Pistorius was often angry with her and treated her badly.
Oscar Pistorius has started his five-year sentence in the Kgosi Mampuru II prison.
What do you think of the sentence Oscar Pistorius was given? Do you think he got enough for the crime he committed? Leave your comments in the section below. 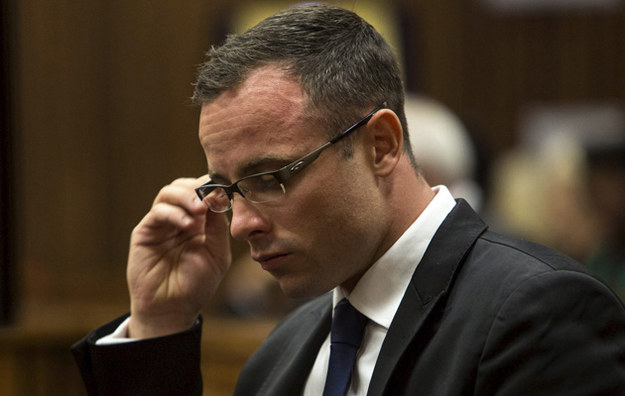 South African runner Oscar Pistorius, 27, will learn his sentence Tuesday, nearly seven months after going on trial for the shooting death of his girlfriend, Reeva Steenkamp. Judge Thokozile Masipa will announce the punishment in the High Court in Pretoria, sentence that prosecutors argued should be 10 years in prison.

The Olympic and Paralympic runner was convicted of culpable homicide last month for shooting dead 29-year-old law graduate and model Reeva Steenkamp at his home in Pretoria in February 2013.

Judge Masipa is expected to take no longer than an hour to hand down the sentence. The cleared Pistorius of the more serious charge of murder, saying prosecutors had failed to prove his intent to kill when he fired four 9mm rounds through the door of a toilet cubicle in what he said was the mistaken belief an intruder was lurking behind it.

Oscar Pistorius’ siblings have criticised media coverage of his trial, on the eve of the South African athlete’s sentencing. Aimee and Carl Pistorius said they were anxious ahead of Tuesday’s hearing, and that the truth had been “twisted and manipulated” and “sensationalised”.

Speaking to South African broadcaster eNCA, Aimee Pistorius said there was “obviously a lot of anxiety” ahead of the sentencing, and that the last 20 months had been “very taxing”.

She said she felt “heartache for both my brother, our family and of course Steenkamp’s family and her friends”, adding that both families would struggle to move on.

“It is important for us that [Ms Steenkamp’s family] know that she was very much cared for and loved, and accepted as part of our family in the short time that she was with us… [Reeva] had a wonderful charisma and zest for life that she just exuded and it was easy to just fall in love with her.”

Defence lawyer Barry Roux said, however, that the double-amputee sprinter should be given community service because his sorrow and regret at being killing the woman he loved was the worst punishment of all.

He also said Pistorius, whose lower legs were amputated as a baby, would face particular difficulties in prison.

The 27-year-old sprinter, known as ‘Blade Runner’ because of the carbon-fibre prosthetics he made famous at the London 2012 Olympics, could also be given a suspended sentence or house arrest.

The murder trial of South African runner Oscar Pistorius, the paralympian accused of murdering his girlfriend, resumes on Monday after a month of mental evaluations to determine if an anxiety disorder could have influenced his actions the night he killed his girlfriend.

The presiding judge is expected to receive reports from the three psychiatrists and one clinical psychologist who tested the Olympic athlete. The evaluation was ordered after a psychiatrist testified for the defense that Pistorius had an anxiety disorder that could have contributed to the killing of Reeva Steenkamp in the early hours of February 14, 2013.

Pistorius has denied the murder charges and said that he shot Steenkamp mistaking her for an intruder who had entered his house through the toilet window but the state insisted that it was pre-meditated murder.

The prosecutor has charged that Pistorius killed the 29 year old model after an argument. Pistorius is known as the ‘blade runner’ for his carbon fiber prosthetic legs. He was the first double amputee to compete in the Olympics at the 2012 games in London.

If found guilty of murder, Pistorius could face life imprisonment. If he is acquitted of that charge, the court will consider an alternative charge of culpable homicide, for which he could receive about 15 years in prison.

The state applied to have Pistorius referred for mental observation after a defence witness diagnosed the athlete with a general anxiety disorder (GAD).

Pistorius’s attorney, Brian Webber, said on Friday that the evaluation was complete and they were ready to go back to court Monday.

“If they diagnose a serious mental illness, Pistorius may get admitted to psychiatric hospital indefinitely”, said Sean Kaliski, a forensic psychiatrist who conducts hundreds of medical assessments annually at Valkenberg Hospital, a facility outside Cape Town.

But it is highly unlikely that a relatively minor disorder such as a generalised anxiety could have an impact on sentencing in a murder trial, said Kaliski.